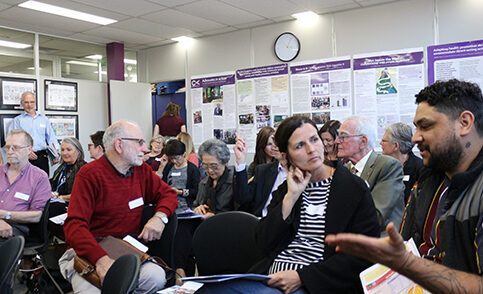 At the Hepatitis Victoria Annual General Meeting (AGM) held today the organisation launched the 2018-19 Annual Report and recognised those who have made a significant contribution to fighting viral hepatitis and liver disease in the community.

Hepatitis Victoria President, Frank Carlus and Chief Executive Officer, Melanie Eagle gave presentations outlining major activities and achievements of note and the structural changes gradually transforming the organisation into LiverWELL™. An electronic version of the 2018-19 Annual Report with a summary of major projects, reports and financial statements can be found here.

Highlights of the AGM included the appearance of Hepatitis Victoria’s former resident dietitian Priscilla Hiromi, who reflected on her pivotal role in the creation of the popular Eating Well: A LiverWELL™ Lifestyle Guide, launched on World Liver Day (19 April) this year and the first of four lifestyle-focused approaches to better liver health.

The winners of our annual community awards were also announced with much fanfare.

Uncle Jack was the was this year’s winner in recognition of his advocacy for people living with hepatitis C, his passion and encouragement of people to be tested and seek treatment.

“There’s nothing to be frightened, shy and embarrassed about hep C. You need to get over that in order to move on,” he says in a Hepatitis Victoria video.

There were three nominations for the Organisation Collaboration Award, the Chinese Cancer and Chronic Illness Society of Victoria, IIbijerri Theatre Company and Forensicare, (the Victorian Institute of Forensic Mental Health).

Forensicare, received the award for its tireless work across the health sector making progress against the unacceptably high levels of hepatitis C inside. Forensicare is the only agency in Victoria that provides clinical forensic mental health services that span all components of the mental health and criminal justice sectors, giving the organisation a unique perspective on mental health and public safety issues.

There were three nominations for the Individual Contribution Award, Cr Lucinda Congreve, Mayor of Brimbank, Marion Lau and Sambath My, all of whom are already HEP Heroes, with Marion Lau receiving the award.

Marion has been very active in the fight against viral hepatitis in the Australian-Chinese community particularly in the development of the Chinese Health Promotion Coalition. She provides continuous support to activities related to fighting viral hepatitis including health promotion campaigns, community engagement and education programs as well as connecting the Hepatitis Victoria project team with Chinese community leaders and associations through her network.